PACKING … apples … not a suitcase for a change!

We have friends, Fiona & Graeme Schultz (F&G) who live in the beautiful Adelaide Hills that are just above Adelaide (similar to the Gatineau Hills in Ottawa but closer to the city and without the maple trees!) and they own an ORGANIC apple orchard - Forest Orchards. Graeme's family have been apple orchardists for a long long time but it was F&G who went out on a limb (metaphorically and from the rest of the family) a few years ago and became an organic operation. 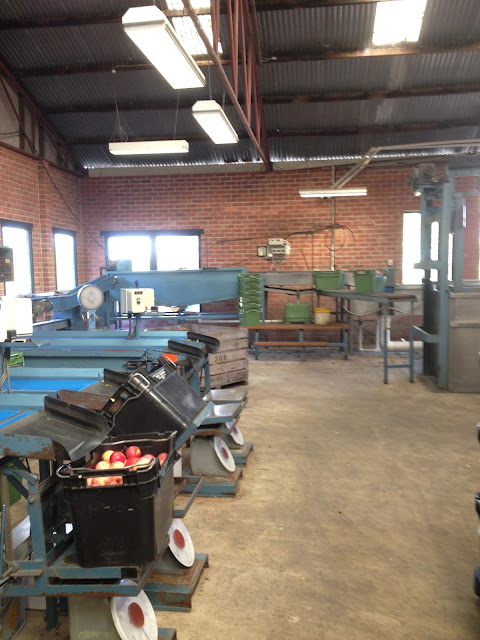 This is the complete packing operation - they start up at the right-hand-side, travel along the top and then down to the conveyor belts on the left-hand side and into the bins.

They also have a spare house on a property they purchased to plant more trees and they offered that house for me to stay in while Joseph comes back to Canada for a few months (Jul-Nov). As a way to pay them back for their kindness we offered to help them pick and/or pack apples.  So - last week their first lot of apples (Royal Gala) were ready a little earlier than usual and they asked if we could come up to help.  ("Up" is UP a narrow, windy (very windy) road that SHOULD be 15kms but feels like 25kms and takes nearly an hour to travel.)  Of course … they start early! 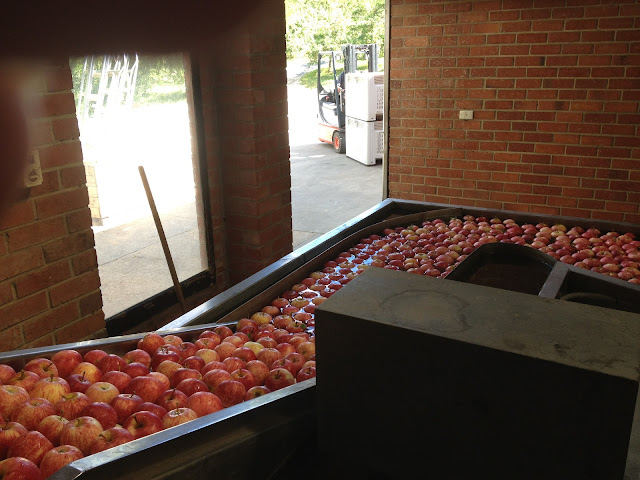 The "dumper" sending the apples up to be washed and into their CUPS!

Fiona showed me how to pack on the conveyer belt - it's pretty easy:
1. load your bin at the end of the belt and gently tip it into position
2. pull out any "bad apples" or pull off any leaves on the stems as the apples roll along the convertor belt
3. GUIDE the apples into the bin with your arms so they don't fall into it and bruise
4. remove the bin when it weighs 15kgs(!!)  and stack it on the pallet 1,2, or 3 high (the higher ones can be left
for the men to load)
5. load on another bin and repeat steps 1-5 again … and again … and again …

The apples arrive on my conveyer belt via another conveyer belt of little CUPS that pick out the apple according to their size (this is all done by computer) and there is another person at the head of the operation who keeps the water dump full of apples and does the first quality control as they are being washed and on their way into the little CUPS.  The little CUPS are pretty cute and I know they save a lot of time for F&G but as they gently drop the apples onto my belt they make a little "clunking" sound. 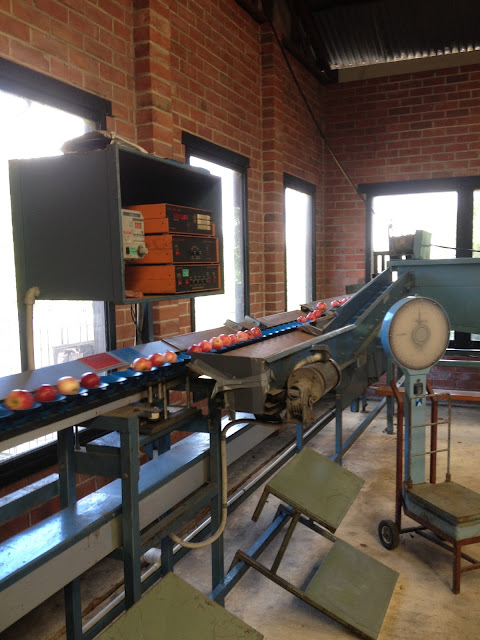 There are the CUPS - those little blue things travelling down the left-hand side!

You should know, that I arrived ready to "pack" with a completely different picture in my head… I thought i would be SITTING down and GENTLY picking out apples and GENTLY placing them in (smallish) boxes, while I listened to my music through my headphones and dreamed about the beach I had just left behind.  Alas!  there is no sitting, no picking out one-by-one, no music - just the "clunking" of the little CUPS at the end of my belt. 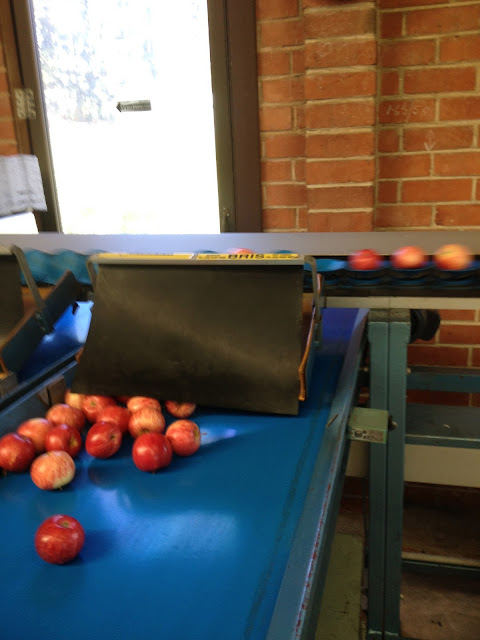 ...and here are the cups dumping onto my conveyor belt which is unusually empty!

My first hurdle was trying to determine what constituted a "bad apple".  I'm sure it must be how the girls at ONW felt when trying to make a decision (on just about anything) … while for Joseph and me it was always more simple - we knew what we wanted (OK - I didn't always know what I wanted!).  So while I am mulling over whether it's a goodie or a baddie the apples are starting to pile up on the belt.

Second hurdle is perfecting the routine of weighing and removing the bin AND getting the next bin back in place AND be in position to GUIDE the apples into this next bin so they don't fall down into it and bruise.  The NEXT bin is critical because if you aren't there the apples fall on the floor … and any apples that fall on the floor are toast … and by toast I mean absolutely no good - not even for juice (which fetch a lesser price but fetch none-the-less).  So you can imagine that F&G don't like the sound of apples falling on the floor.

Third hurdle is lifting 15kgs. I started off lifting it off, carrying it to the pallet and stacking it three high.  Then I realized I could only stack two high and then very quickly I realized that I could hardly carry it to the pallet let alone stack it any height at all.  So I became surrounded by full bins which, while they are certainly a sign of how much work I've done, also obstruct your access to the NEXT empty bin and this can cause problems... 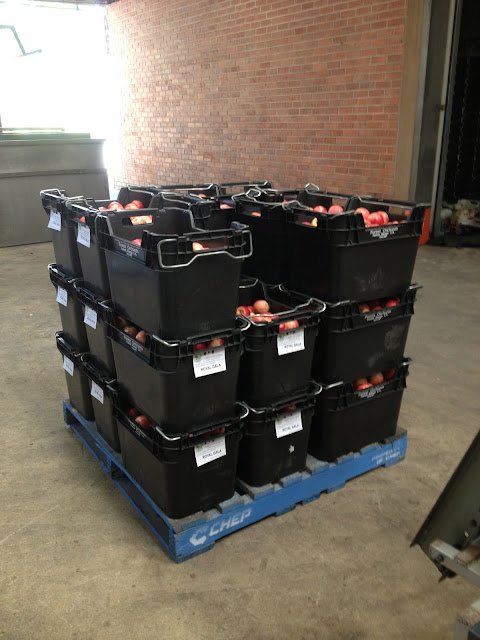 So, as is usual for me, I start out OK but then as I get more comfortable (a.k.a. cocky) I start to mess up and I forget the NEXT bin (or can't get to it in time) and some apples fall on the floor and now I'm stressed and the clunking sound fills my head and I become more stressed (similar to being at the casino and the clunking sound of coins that everybody else seems to be winning!)… and I can't get the leaf off of the stem, and I can't decide if this blinking apple is good or bad and the apples are piling up and … finally … I have to admit defeat and yell STOP! … and the whole operation comes to a grinding halt.

Then we break for lunch (they actually stopped for morning tea (20mins @ 10.30) but it's a blur and now I am so happy we are stopping for lunch.  I inhale my lunch and collect my thoughts and by now Joseph has arrived and I'm not the new one anymore.

Joseph has a university degree so he is put on packing the trays.  Packing trays requires more "skill" because you have to remember which tray to use; different trays for different size apples and the trays are A and B and they must alternate so they pack properly and you have to make sure that there enough trays in position to feed the conveyor belt.  If there are no trays in place the apples pile up on the belt and bang into the trays in front and then … fall on the floor.  And this is exactly what happened to Mr. J.E. Dafoe with his university degree! 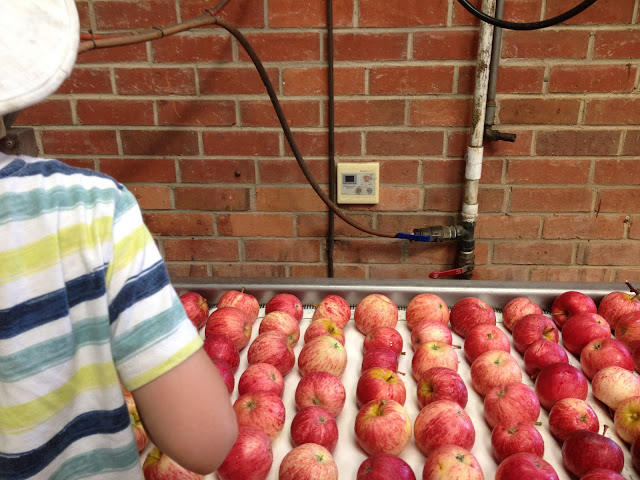 Now our van is setup under an acorn tree next to F&G's house and we will stay and "help" them pick/pack until we are ready to leave on our trip at the end of March.  Let's hope the 39c days are behind us… the apples stick to my arms when I am hot!!

P.S. I am not going to stay in F&G's spare house - I've decided to stay in the city instead.  Cassia will come and stay with me when she arrives in July and we will be company/support for each other until the boys arrive.